I showed THAT tree! Yeah! So, there! 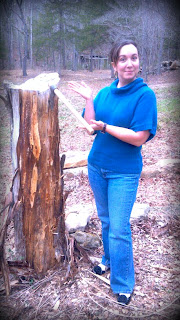 Who said being active meant doing the same old exercise? Try throwing a tomahawk for a  while (and the accompanying fetching of said objects). Or, or... you can shiver for a really long time because you just can't plan on this kind of activity when dressing for the day. However, you should ALWAYS wear your fabulous earrings and black patent ballet flats. ALWAYS. ;-D

What are you doing to stay active, now that the weather is turning chilly?
Posted by Amanda at 7:36 PM 4 comments:

The One Where I Cry Over Milk

Yes, yes, cliche', I know, but it's the truth! I got all teary-eyed in the milk aisle. It isn't the milk's fault, really. The fault belongs to the cookies sitting right beside the milk. I haven't had any cookies for over two months, not that I have missed them. I'm not a big sweetie fan, preferring savory flavors any time, any day. Somehow, though, those cookies just wanted to torture me!

I was already feeling pitiful and edgy, so the inability to just eat some cookies just bowled me over. Any guesses as to what I did?

Yes! You, over there, you understand me!

I totally bought some jelly-bellies and animal crackers. Yes, I lined the animals up in a parade-style line and marched them into my milk. Yes, the jelly-bellies are gone. I love Every. Single. Bite.

Told Dad= Win!
He didn't flip out at all! He actually commiserated, as he, too, can have pretty yucky lows. He is just glad that I'm doing something to take care of myself.

Told Mom= Win!
She just wants to make sure that I am healthy enough to try to start a family. I'm not sure if that will be a possibility for Hubs and I, but, hey, we won't know till we get my insulin under control.

By the way, it's all I can do not to double-space between my sentences!
Posted by Amanda at 8:33 PM 2 comments:

This post is coming out of my experience with a class of soon-to-be CNAs (certified nursing assistants) that I had the pleasure of teaching this morning. The subject was dementia and Alzheimer's. We spent three hours discussing the pathology of dementia, when/if it is reversible, signs and symptoms, etc. Then we went over and over and over, again, that folks living with dementias are still unique and special people who need to be respected and treated with dignity and respect. Each student seemed engaged and I really appreciated that. At the end, I wanted to share my story about being a CNA and why I was so glad that they were doing such a yucky and, often, thankless job. Let me share a bit of it with you.

Right after I graduated from high school, I became a certified nursing assistant. It was a great fit! I adore older adults and am a natural "mother hen". I worked the 11pm-7am shift that summer. Talk about some great experience! I was able to hear some of the BEST stories and meet some of the most interesting people. Sure, most of the time the residents were asleep and I would tip-toe around their room, making certain they were safe, warm, and comfortable. There were the icky parts, but, well, that just goes along with it. No biggie. However, when the residents rose in the morning, they were usually so generous and patient with me. Yes, that would be fine to wear today. Yes, they liked how their hair was styled. Along with all the usual morning activities, though, they would often tell about their life when they had young children. They would regal me with stories of The War, trips they had taken, the first time they saw a television. I soaked all of it up! I really enjoyed having a chance to learn so much from them.

I paused after that to take a breath and then told the students the rest.


This made the students sit back and some grimaced. Some of you are probably doing the same thing. That's okay, though. We each have our own unique strengths. I was influenced from a very young age by Mother Teresa (Blessed Teresa of Calcutta). I only knew of her obvious work in India and not of her internal work, but I have digressed. She was a woman that I felt was an example of how I wanted to live my life. I  even contemplated becoming a nun for many years.

I found a great deal of peace in holding the hand of, really, a stranger, and loving them with all my heart as they took their last breath. This was especially important for those residents who hadn't any family to be with them, or whose family could not emotionally handle the passing of a loved one. I understood. I just had to be there, though, for that person. I had to hold their hand and stroke their arm. I needed to smooth their hair. I needed to let them know that they were cared for and loved. They needed to know that they could Go in Peace. I would hold their hand until they were officially pronounced. I would accompany the men as they bundled up their precious cargo and placed them in the van. Someone had to make sure that that person was treated with dignity, even if they were no longer breathing. They needed a "beautiful death".

I am no saint. I curse more than I should, if ever, really. I think mean thoughts. I have struggles just like you do.

I ended my story and thanked the ladies, again, for committing to such an important task. One of the gals had started crying and I dismissed class. I had hoped to give her a big old hug, but she left before I could speak with her. I'll never know exactly why she was crying. I hope, though, that maybe she could relate. Maybe she will take on this task, of loving a dying stranger, and make their final moments meaningful. I hope. I pray.

A few of you may be aware, by now, that I like to pretend to be "Little Susie Homemaker". 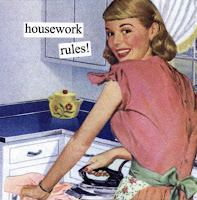 So, I suppose the rest of me is pretty zaney. I would have this hairstyle if it were acceptable in my line of work.

First, let me take this headband off... ahh, much better. Now my brain can get some much needed blood and oxygen. (Why do they make headbands so tight, anyway?)

Second, Oops, bgnow 177. Better get my BigBlueTest on. Be back in a bit.
Woohoo! bgnow 133! That's better. I'll do some more cardio when I finish this post.

You know what's amazing? Our bodies. I can't believe that 14 minutes of yoga/pilates, in my office no less, has the incredible ability to get my blood sugar back in check faster than a pill can. Exercise IS medicine! As least for me. I had a yucky headache, a tired back and bum, and slightly swollen feet before I exercised. You know what? I feel like 100% now! I barely broke a sweat!

Yes, this IS a schmexy post, indeed! NO, I don't have head lice. YES, I did wear blue today, as I will each Friday in November, to celebrate Diabetes Awareness Month.

I'll cut to the chase regarding the head lice. I've been busy zooming around different counties helping schools conduct flu clinics for the past month. Well, imagine my chagrin when I found out Wednesday that I would be in a lice-infested school one day this week! NOOOOOOO!!!!! Apparently, two of the schools had a quater of their student population suffering from these creepy crawly creatures. (In actuality, I find them fascinating, but I don't want to study them UP CLOSE and PERSONALLY.) So, the kiddos are cute and several of them want me to hold their hand or cuddle them on my lap whilst the nurse gives them their shot or nasal vaccination. I did it, OF COURSE, but... I felt terrible for trying to keep my hair as far away from them as I could. Some of them just melted my heart! Gah!  Okay, that's all I have for lice. Sorry, no terror story.  *Scratches head*

The fun part, I wore a blue streak in my hair, blue diabetes awareness bracelet (thanks to Kim), blue coat, blue sweater, and blue watch today. The sad part, well, I had to take it all off as soon as I got back from the clinic so that I could bathe and wash my clothes. I love you guys, but come on... I just can't get down with the lice.  *Scratches other side of head*
Posted by Amanda at 2:43 PM 6 comments: